Embroidery has been one of the most respected crafts of all time. It is a skill that takes time and effort to develop in oneself as well as produce for others. Our country, India is blessed with one such craft that has achieved fame even at the global level with every foreign citizen dying to get their hands on it. This is Lambani Embroidery.

The Story of the Banjara Tribe and their relation with Lambani

The Banjara(nomadic) Tribe is an indigenous and native pan Indian tribe found in the regions of Maharashtra, Karnataka, Telangana, Andhra Pradesh, Tamil Nadu, Gujarat, Madhya Pradesh, Odisha and West Bengal States and living in all the other States except the North-Eastern States and Union Territories. They are originally believed to have migrated from Afghanistan and settling in Rajasthan and other parts of India. Although Banjara Tribes have their own oral literature and tradition, there is no written form of the same. Knowledge is orally imparted across generations. The Sandur Community in Karnataka and the Bijapur Community in Rajasthan and Northern parts of Gujarat are at the forefront of creating hand embroidered Lambani works.

Lambani Designs can defintely be considered as one of the most interesting parts of Lambani Clothing. Mirror work, cowrie shells are the most common items used. Sometimes, old ancient Indian Coins are also used for decoration which gives Lambani its unique touch. 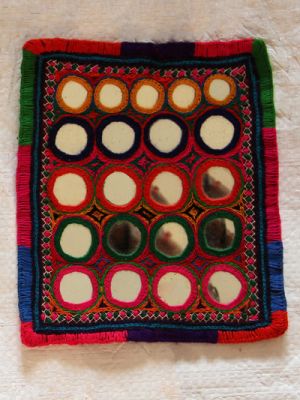 Traditional Lambani Clothing was, and still is, the daily attire of the Banjara Tribe. However, the young generation has now begun opting for more casual clothes due to exposure to modern day clothing. However, they still help in making of the clothes and are helping their precursors keep the craft alive.

Lambani Clothing can be characterized as vibrant, extravagant and colorful. It is very bohemian in nature, which makes it a favourite among tourists.

The patterns are mainly geometric shapes like circles, triangles, squares, rectangles which is a common theme among handloom clothing. All these stiches combined together, produce a magnificent output.

There is a fixed palette of about 13 colours used in Lambani Clothing. Red and Blue are the most common ones today.

The base cloth is generally cotton khadi or silk. 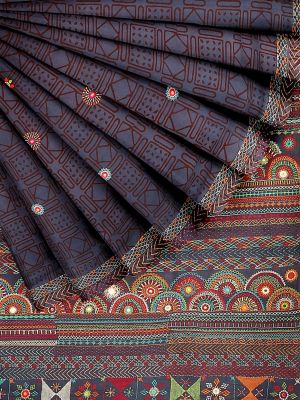 Nirguna Trust strives to keep such traditions like the Lambani Craft alive. Nirguna has an exclusive collection of cotton and silk sarees with Lambani Embroidery for your next festive outing.

The next time you receive a compliment for your Lambani Handloom saree, enlighten them with some facts about Lambani Embroidery, as you’ve read above!

Sandur Lambani Embroidery received its GI tag in 2008. Online shopping portals supporting local artisans have led the movement for awareness and support of this tradition. Many organizations across the world also recognised Lambani Craft for its wide workforce of women artisans who keep this passion alive, even in the 21 st century.

The tradition has also seeped its way into the political sphere, with Ministers in Karnataka donning traditional Lambani attire for ceremonies.


Your shopping cart is empty.